Love In An Escalator

by The Electric Grandmother 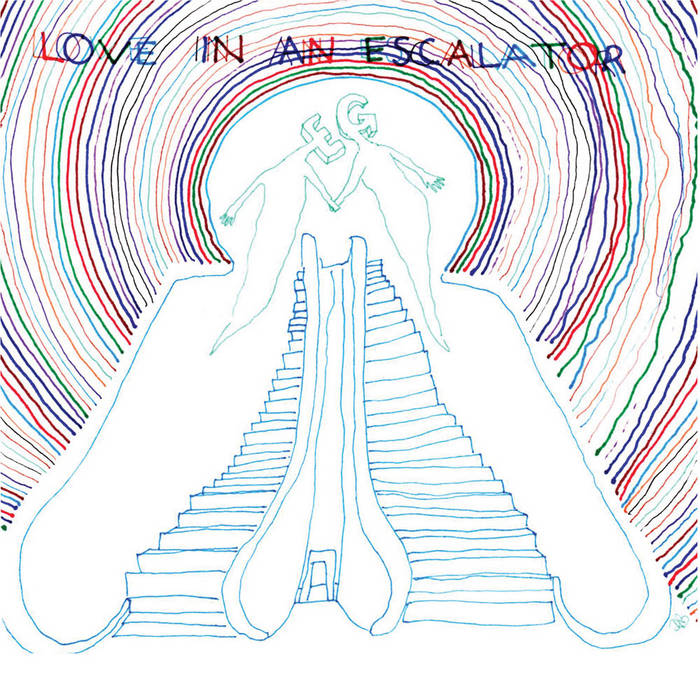 Love in an Escalator, The Electric Grandmother’s 7th full-length release is their most sonically ambitious album to date, recorded over two years amidst the band’s move from Columbus, Ohio to Washington DC.

The title-track is a declaration to move onward and upward, a couple weathering the storm of transition and change. As illustrated by the emotive cover art by Anna Bihari, the band continues to press on with an “Us against the world” mentality, all the while determined to remain free spirits.

Pete Faust continues to defy songwriting convention while adhering to cohesive pop melodies in the style of an electronic-Ramones. In addition to her duties as the band’s live multimedia artist, Mary Alice Hamnett joins in on backup vocal duties, adding a saucy dynamic not heard before on previous EG albums. With this, the band finalizes what had been an ongoing transition from solo-to-duo. Faust presents his usual sense of humor and postmodern sensibilities with observational quips about near-modern and contemporary entertainment on songs such as “The Internet,” “Virtual Reality Helmet,” and “Sitcom-Core,” a tongue-in-cheek analysis of the very genre he invented. The TV Sitcom themes are more often present on this album as metaphor and allegory, while occasionally still tackling the subject (The Cosby Show) head on in songs like “Mr. Clyde.” Faust’s wide musical influences are on display throughout - “Reagan’s Got the Bomb” is a tribute/parody of 80’s hardcore punk, while “Mom, What are Girls Like?” harkens back to old school hip-hop. The album is avant-garde without being pretentious, because while the band has matured musically, the subject matter clearly demonstrates the lack of maturity we’ve come to expect.

The Electric Grandmother is the story of a couple and their lives, come together to make humorous, surreal, post-modern music and imagery. Inventors of the genre "Sitcom-Core." Purveyors of love and vulgarity. Washington DC is their home.

Bandcamp Daily  your guide to the world of Bandcamp

New sounds from Mavi, Ivy Sole & Moderator, plus AJ, the One joins the show, for her latest release